Given what the country went through in the early part of the 1990’s its so good to see Bosnia and Herzegovina now a regular stop on many of the Balkan tours that take in the neighbouring countries in the region such Croatia, Montenegro, Slovenia and Serbia. There was a time not so long ago when the mere mention of the name deterred potential visitors. Having visited on a couple of occasions in the early part of the 21st century I always found that sad given the natural and historic attractions of this beautiful country.

I remember taking a self drive tour from Split in Croatia to the Bosnian capital Sarajevo and then on to Mostar before ending a weeks holiday in Dubrovnik back in Croatia. On another trip over New Year I spent a weeks skiing in Sarajevo on pistes that hosted the winter Olympics back in 1984 – the same Olympics where Torvill and Dean won Olympic gold on the ice rink with that famous Bolero routine.

Bosnia and Herzegovina is one of Europe’s most diverse nations lying at the crossroads of East and West. It has the most spectacular rugged mountain scenery with quaint little villages, the tiniest of Adriatic coastlines, wonderful architecture and the most inspiring capital city I have ever visited. The story of Sarajevo is long, incredibly sad but also remarkably uplifting as today the city is reborn and revitalised.

The country is also more than just Sarajevo. Mostar and the famous bridge where locals dive off the top into the Neretva river below is special. Medjugorie a site for religious pilgrimages is popular as is further out into the country such as Krajeva Sutjeska, Jajce and the Dinaric Alps. Back in early 2000 Sarajevo was very different to today. I received a wonderful welcome from a local travel agency who could not have done more to make my visit special.

I stayed at the infamous Holiday Inn Hotel on what became known as sniper alley which connected the industrial area to the old town. The hotel was still run down and desperately in need of refurbishment.

I will never forget the story of the magnificent building that is the Sarajevo National and University Library. It was deliberately targeted in the war resulting in almost all the books and contents being destroyed along with so much of a cities history and identity.

The last night I spent in Sarajevo I was taken to a local restaurant up high looking down on to the twinkling lights of the city. Te atmosphere was superb, the food divine and the memories have lasted to this day.

Sarajevo changed my outlook on life and I fell in love with the city. There is a very special atmosphere around the markets and the cities streets that cannot be explained in mere words.

Travelling around Bosnia and Hercegovina is well priced and pretty good.

Car
I hired a car in Split and drove around Bosnia and ended up in Dubrovnik. Car Hire for different countries needed to be declared at the pick up in Croatia and I was stopped by curious police a couple of times but with the necessary paperwork all was fine.

Bus
Generally a good and cost effective service although of course a little slower than driving yourself.

Train
The routes offered by train are few and the service slow and infrequent but if you have the time it takes away some of the stress.

Air
International flights into Sajajevo are your airlinks for Bosnia with no domestic network.

Places To Stay in Bosnia

National Park Una
One of the newest national parks in Bosnia having been established in 2008 the Una National Park was formed in order to protect the natural beauty around the rivers of Una, Krka and Unac. The area is popular for activities such as rafting, kayaking, mountain biking, hiking and swimming in the many lakes and rivers.

Pocitelj
The medieval town of Pocitelj is a 15th century Ottoman fortress that has been restored since the Bosnian war of the 90’s. This is a popular excursion on the Bosnian tourist trail.

Ethno Village Stanisici
The Ethno Village Stanisici is a fascinating, ancient, preserved village comprising about 20 wooden houses including a blacksmiths, a dairy, a water mill and an old guest house. Two luxury hotels now cater for visitors on tours of the area, the Hotel Pirg and Hotel Ras.

Prokosko Lake
The Prokosko Lake is a beautiful fresh glacial lake, located around 14 miles above pretty Bosnian town of Fojnica.

Srebrenik Fortress
Just outside the town of Srebrenik, is the countries most well preserved medieval castle which dates back to the 14th century.

Bascarsija, Sarajevo
One of the signature locations in the heart of the capital of Sarajevo is the Bascarsija. It is a bazaar and central square with incredibly distinct architecture. Like so much of Sarajevo it has a sad past having been destroyed by fire and reassessed whilst part of the Austro-Hungarian empire. Thankfully after World War II this symbol of Sarajevo was re-established to what it is today.

Stari Most, Mostar
The world-famous and UNESCO protected Stari Most is in fact the stunningly beautiful Mostar Bridge. Originally built in the 16th century it was destroyed in the conflict of the early nineties however today it is rebuilt and attracting visitors from all over the world. Either side of the bridge are pretty stalls and cobbled street selling local produce and crafts plus there are some fabulous cafes and restaurants to enjoy.

Kravica Waterfall
This incredible waterfall is one of the largest In Herzegovina . In summer the pool at its base is a very popular spot for swimming and down stream kayaking and other outdoor activities are popular. There are cafes, restaurants and areas to enjoy a picnic in beautiful natural surroundings. 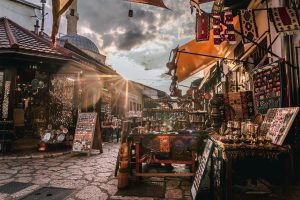 Scream For Me Sarajevo…