Since the fall of communism in 1989, the Czech Republic and its capital Prague has evolved into one of the leading European nations for tourism and travel.

The country as a whole has numerous UNESCO protected sites, over 200 castles and chateaux, 4 national parks, over 100 golf courses not to mention many urban conservation areas and protected landscapes. The Czech Republic is a country that prides itself on preserving its history and its natural environment.

Trendy Prague receives many of the headlines as it is ideal for a short break especially with its airport just 17kms from the heart of town. A city that has developed new bistros and restaurants, both traditional and hipster cafes, micro breweries and wineries. Add to that year round attractions including farmers markets, summer fayre’s and the famous Christmas markets. Then there is the history in Prague with its impressive Gothic architecture, castle ramparts, Prazsky Hrad Castle, and St Vitus Cathedral towering over the city. For entertainments you have the national opera that re-opened in 2020, the national museum and also the national gallery.

In Moravia and South Bohemia, there are medieval towns, festivals, castles, fortresses, and chateaux. The Spa towns in Bohemia have a reputation of being some of the very best in the world.

For nature, there are over 600 protected parks allowing for hiking, walking, and with over 37,000 kms of routes – cycling.

Rightly so the Czech Republic and its friendly welcoming people has emerged as one of Europe’s favorite countries for holidays, relaxation and adventure. 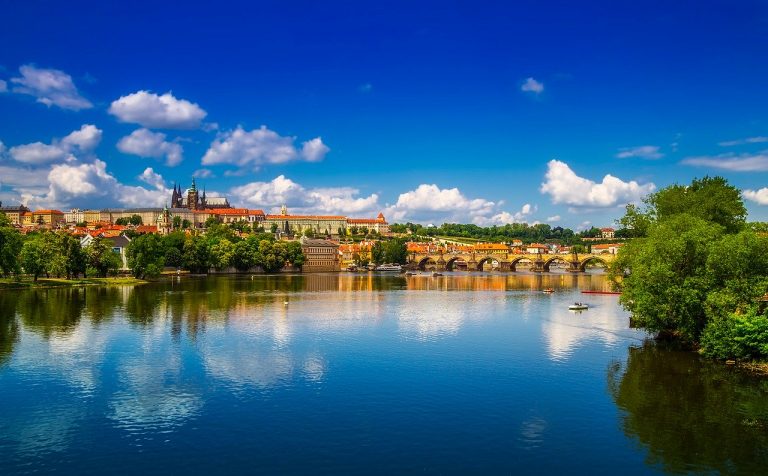 Bus & Trains
Both are good value and provide visitors with a network of comfortable services. Access to key cities are best connected from Prague by train. Pilsen is just 50 minutes away, Brno is 2.5 hours away and Ostrava 3 hours away.

Trams
A city centre tram service in Prague is available both day and night and accesses places where buses cannot.

Metro
Prague also has a Metro station making transport across the city simple and cost effective.

Car Hire
Car rental is easy from all the main city locations, the airport and from all major hotels. Roads are generally good throughout the country.

Taxis
Be cautious when hiring a taxi and be sure to negotiate a fare in advance.

Bicycle hire
As with so many European capitals, the major cities are encouraging eco friendly bike hire.

Walking
Prague and other parts of the Czech Republic are best enjoyed on foot.

In the main cities, there is a choice of fabulous stylish hotels. Some cheaper budget properties exist however do not expect too many frills.

Other sleeping arrangements are family-run pensions, apartments or if you venture into the hills then why not try a mountain hut or luxury chalet.

Heavily influenced by Germany, Austria and Hungary the Czech cuisine includes delicious soups such as Kulajda and cesnecka. There is also goulash, dumplings, potatoes, pork and Bramboraky which is type of potato pancake. There is street food in Prague where the traditions date back to the 19th century.

The Czech Republic is famous for beer and Absinthe. Brands such as Staropramen and Budvar are well known to us in the UK. The Budvar Brewery is a very popular excursion for many visitors to the town of Ceske Budejovice. Here you can discover how the beer is prepared from the initial ingredients through all of the processes before ending up on the bar in front of you.

Czech beer is superb and the industry has seen a real explosion in microbreweries and craft beers in recent years .

Prague
The capital of Prague is known as the City of a Hundred Spires and has the most wonderful old town and the central square with the Church of Our Lady and a famous astronomical clock. Another popular area is Charles Bridge and up to Prague Castle

Cesky Krumlov
Alongside the Vltava River south of Ceske Budejovice, Cesky Krumlov and its castle is a UNESCO old town in the heart of South Bohemia.

Castle Karlstejn
One of the most iconic gothic Castles in the Czech Republic. The views from the castle across Bohemia are worth the hike up the hill.

Brno
The regional capital of South Moravia, Brno is a student town with a strong music and café scene. The pretty Old Town, Cathedral, and Castle all adds up to a cracking Czech experience.

Ostrava
Located in the north of Moravia, Ostrava is a low-key old town with a history from Baroque to a Russian mix of styles. There is much to see in Ostrava with the story of the Michal Colliery as well as Masaryk Square, and the Lower Vitkovice Area.

Liberec
Located in North Bohemia and bordering Poland, the town of Liberec provides a mix of Slavic, Germanic, and Austrian influences. The Jested Mountain and forests providing plenty of opportunities for those seeking winter sports or summer hikes.

Ceske Budejovice
This town is famous for beer. Wherever you go there are microbreweries, beer halls, and traditional Czech taverns. The famous Budejovicky Budvar Brewery on the northern edge of the town provides tours and of course, the chance to taste the famous beer.

Lipno
Close to Austria, the lakeside town of Lipno is a fabulous Czech town in South Bohemia providing visitors with an array of outdoor winter or summer pursuits.

Moravian Karst
For caves, gorges, and canyons the Moravian Karst is a breathtaking area of the Czech Republic. The area not only offers geological interest but also outdoor pursuits such as caving, hiking, walking, and biking.

Regions of The Czech Republic

This is very much an area for wine growing with the opportunity to visit local vineyards and wine cellars on tours and excursions.

There is also a unique cultural heritage here especially in the Lednice Valtice valley with its castle, horse carriage rides, gardens and also its wine salon in Valtice.

A popular pastime in South Moravia is to tour the 1200 kms of cycle routes where you can stop at the many vineyards and orchards for some refreshments.

When in South Moravia a must is to visit the city of Brno for its cultural and gastronomic scene.

This is the land of lakes, castles and Ceske Budejovice as well as the UNESCO sites of Cesky Krumlov and Holasovice.

For those looking for an idyllic retreat why not head for the neo gothic Hluboka chateau.

If you are a fan of active holidays then you wont be disappointed in South Bohemia. Try the watersports at the Lipno reservoir or hiking in the Sumava mountains.

This region of the Czech Republic is best known for its world famous spas which provide a unique atmosphere and often set within beautiful ornate architecture and with an amazing history.

Karlovy Vary is also known for having the highest concentration of high quality golf courses.