There are not many people in this big old world of ours that don’t love many or perhaps all things Italian. A beautiful country with beautiful people combined with pizza, pasta, passion, and Pavarotti …..I’d call that perfection!
As I was growing up my father often used to mention, on a fairly regular basis and egged on by my mischievous mother, his adoration for Sophia Loren, the beautiful Italian actress from the latter half of the 20th century.  She epitomized Italy in the ’50s and ’60s with her grace, her style, and class. It puts my teenage crush of the 80’s singer now gardener Kim Wilde into perspective – oh well each to their own eh!
When I sit back and think about it perhaps I shouldn’t love Italy as I do. So much of it is the mirror opposite of what draws me to a country – the roads are chaotic, screaming kids (and adults) run amok in restaurants, the people love to show off, personal space on beaches rarely exists, and the political scene is a shambles and everything is last minute……yet somehow none of that matters as you just get wrapped up in the magic of a country that just takes your breath away at every turn. Over the years I have visited Italy on a number of occasions and each time I have questioned why it took me so long to return. I actually get that feeling about a lot of places but Italy perhaps more so than most!

I think for a long time I saw Italy just as a weekend or city breaks destination which it is but there is of course so much more. I perhaps overlooked the idea of a full summer holiday as in my twenties and thirties there were other hotspots offering the bright lights and boozy nights for a fraction of the cost. As I have gotten older though, and it comes to us all, places like Italy and Croatia which have so many similarities, have become much more my scene.

Now, of course, the idea of a week or two in a Tuscan villa with a pool overlooking olive trees and vineyards, or an island escape, a cultural adventure, or a Venice and Rome two-center holiday with added-on experiences like wine tasting, truffle hunting, olive oil making is exactly where I am now at!

Something I have also always dreamed of doing is touring Italy in a open-top sports car. I actually did do that on the island of Sicily back in the ’90s but the thought of travelling the Mille Miglia route of the fifties in an iconic Rosso red Ferrari Dino 206 GT is the stuff of schoolboy dreams as opposed to my reality of cruising stressed as hell through the crazy streets of Palermo, Sicily in rush hour in 1996 in a Renault Megane – it was a convertible mind… but silver….and French!

Places To Stay in Italy

In recent years Agriturismo has become really popular although actually, it originated back in the 50s with so many of us conscious of what we consume, the healthy organic homegrown farm stay has really taken off. Many of the farms are suitable for the family as they allow the kids to interact with the farm animals.

Italy can be whatever you want it to be…. personally I love to experience the real Italy rather than the glitzy 5-star hotel offering impeccable service. and fine cuisine.

Cities like Rome, Naples, and Florence in Central Italy are home to some of the country’s best cultural attractions. As you head to Southern Italy, the sun-drenched coastal towns like Sorrento or the Bay of Naples area, offer traditional Italian life, authentic experiences, excellent food, and wonderfully fresh locally grown produce.

Italy is also full of romance and iconic places to visit, such as Rome’s Colosseum, the amphitheater in Verona, the Northern Italian lakes of Garda and Como, and then there is also Pompeii, the Amalfi Coast and of course you have the Vatican.

I have been fortunate enough to spend a lot of time on the Islands of Italy particularly Sardinia back in 1998 when I lived in Corsica. I used to regularly make the short 45-minute ferry crossing and visit Sardinia’s wild coastlines and secluded coves as well as the glitzy seaside towns of the Costa Smeralda or the historic old town of Alghero. If you’re after culture, then Sicily is packed with sights to see too, the original Greek settlement in Syracuse, the mystical village of Corleone, or the majesty of the smoking Mount Etna.

Whilst these are the iconic hot spots, I get just as much, if not more enjoyment from undiscovered Italy, the off-the-beaten-track retreats, the little villages, those cobbled streets in the twilight hour, that knockout coffee hit at breakfast or as I remember like it was yesterday, the Pecorino Romano cheese soaked in rosemary oil washed down with a glass of Chianti in stunning Lake Como.

Now when people start talking to me about Italy there is strangely a moment from the world of football that I believe sums up this country.

It was back in 1982 at the World Cup in Spain when an Italian team who were slow out of the blocks at the start of the tournament hit their straps and made it to the World Cup Final against an unbelievable Brazillian team.

Against the odds Italy won the final and in doing so scored a goal by Marco Tardelli which had one of the greatest goal celebrations ever and it still gives me goosebumps to watch it today ….and I am English! Even if you hate football have a watch – it’s just 50 seconds.

Watching this clip, listening to the Italian commentary, and seeing that excited elderly gentleman in the crowd maintaining his style just sums up this nation – Italians are emotional, they are passionate, they are flamboyant, yes they are loud, and yes they are at times crazy but mamma mia….. put this all together and its dynamite.

There is a saying in Italy – “La vita è un sogno” – which means “Life is a dream”. Welcome to Italy!

The main international airports in Italy are Malpensa Airport in Milan and Leonardo da Vinci Airport (also known as Fiumicino) in Rome.

In Sardinia, there are three main airports – Olbia, Alghero and Cagliari whilst in Sicily there is Catania.

Hiring a car in Italy is highly recommended if you planning to get out of the city for a reasonable amount of time. I have hired cars in Sicily and Tuscany and loved the freedom! If you are on a city break then bear in mind the streets are going to be crazy busy with traffic and scooters and even in some places cars are not allowed like in the old town of Florence.

To hire a car in Italy, you must be at least 18 years old and have held your license for 1 year. An International driver’s License is expected. On average car rental works out to about £20-£25 per day so it is pretty cost-effective. Make sure you take out all the different covers as if you do venture into the cities losing a wing mirror is a distinct possibility!

The choice of both domestic and international ferry options in Italy is mind-blowing but when you consider that the majority of Italy is surrounded by sea then it is really no surprise.

My advice is to plan ahead.

A useful website when planning is this is Aferry although of course, your travel agent can often pre-arrange these itineraries in advance.

Taxis in Italian cities are usually yellow or white and as always are best hopped in at official taxi ranks for instance at railway stations, airports, and in town centres. It’s not usual to hail them on the street although you may get lucky.

Taxis should have a meter, which I would advise you to check is switched on. If it’s not then agree on the fare before setting off. Taxi journeys in Italian cities aren’t for the faint-hearted with drivers regularly ignoring speed limits so it’s your call!

Fares are set by the local authorities. There are often supplements should you have luggage, travelling at night or to the airport. Tipping is not expected although it’s common to round up the fare to the nearest euro.

Trains in Italy are a fantastic way to travel around. On the whole, they are cheap and reasonably reliable, although some of the older trains are not particularly comfortable. All are now non-smoking which is great news. Italy’s railway coverage is very good although of course up in the mountains and rural areas you will need to seek the use of other transport.

Train services in Italy are mostly run by the state company Trenitalia. There are also a few privately-run local lines.

Always research your journey in advance and note the different fare classes. Once you have your ticket you are restricted to that type of service – as in the UK if you are caught using a different service then there will be a charge.

I loved travelling by train in Italy – it’s easy, it’s exciting and as always letting the train take the strain allows you to marvel at some of the country’s beautiful countryside. 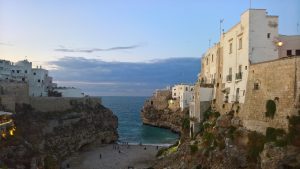 The 6 Regions of Southern Italy 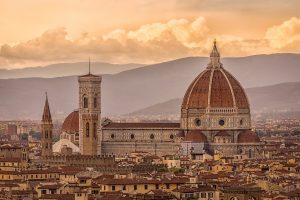 The 4 Regions of Central Italy 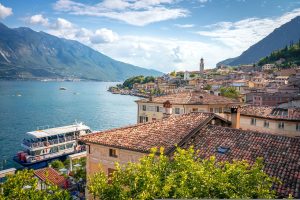 The 8 Regions of Northern Italy