The Svalbard Islands are located in the Arctic Ocean, halfway between Norway and the North Pole. A truly arctic wilderness with unique wildlife in a setting that is both rugged and fragile.

With a history of whaling and trapping Svalbard seems to have turned the other way with sustainability being at the heart of the development of the area. There are many nature reserves, and national parks which make hiking and outdoor adventure a key activity for visitors.

The capital is Longyearbyen a small town with a number of restaurants, bars, and even a small brewery.

For more information check out my guest blog from Heather Cragg on her trip – The Artic Fairytale of Svalbard.

Snowmobiles are the preferred method of transport in Svalbard.

Taxis are available and a good way to get around particualrly in Longyearbyen and surrounding areas..

There is an airport shuttle bus that stops at all the hotels and accommodations in town.

During the Polar Summer, you can use the bicycles at the Tourist Information Centre in Longyearbyen.

Places To Stay in Svalbard and Jan Mayen

Polar Bears
Between May and September, the boat cruises near the frozen fjords offer the best chance of spotting the largest bear species on earth – the polar bear. It is recommended to take a guide when leaving Longyearbyen as it is a law that you need to be armed in case of a surprise attack!

Midnight Sun
In Svalbard, the sun does not set from May to September. This phenomenon is known as the midnight sun. Between November and January, it does not rise and this is the polar night and the best time for the Northern Lights.

Husky Dog Sledding
the pastime of mushing or dog sledding is a popular activity in both winter and summer months. Of course, in winter it is on the snow but in summer especially adapted vehicles with wheels give you a similar experience albeit without the snow!

The Global Seed Vault
A vault containing seeds from more than 930,000 varieties of food crops in case there’s a global disaster and the world’s crops are wiped out.

Snow Mobile
Experience the thrill of riding past icy glaciers, frozen fjords, and snow-clad mountains. This is a really special adventure.

Pyramiden Ghost Town
Listed by National Geographic as one of the world’s 10 best ghosts, Pyradmiden is a former Soviet town and a fascinating trip back to the 80’s when it was formerly occupied.

Go Hiking
In the summer months, the area around Longyearbyen is surrounded by stunning mountains to explore. 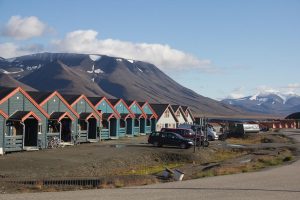 The Arctic Fairy Tale Of Svalbard