Kawaguchiko and the lakes

Unfortunately yesterday was ruined by the weather as the majority of the day it threw it down so our plans to see Fuji were dashed!

We took the short 10 minute transfer from Alton towers (Fujiuku Highland) to Kawaguchiko. This is one of the five lakes that lie at the bottom of Mount Fuji. Online research into where to stay suggested Kawaguchiko and this has proved the right decision as the others are much much quieter.

Kawaguchiko is still a sleepy, throw back in time kind of town with a limited choice of restaurants and souvenir shops. In fact it’s so old fashioned the restaurants don’t even have the umbrella condom machines. Instead they have an elderly lady to bag you up on arrival.

We checked into the dated Hotel Kawaguchiko however it was on the wrong side of the lake to see Fuji. Despite that with a 1950’s style, a friendly manager, a tiny bar and formica everywhere it was one of those quirky marmite hotels.. I loved it!

With the weather we had no option but to source beer and food so we found a restaurant overlooking the lake. Worth noting that many places shut between 3-5pm for a siesta!!!

We chose to eat Houtou which is like a hot pot of noodles, vegetables and meat which is cooked from cold on a fireball at the table . However it’s the messiest meal ever especially given my inability to use chop sticks! More ended up splashed on me, the table and the floor than went in my mouth!!

Over lunch we looked at things to do when it rains in Kawaguchiko and we found a Sake distillery. Having walked there we missed the tour by a few minutes thus avoiding an afternoon of shots and spirits . This was perhaps a good thing because as we left we needed to dive into another restaurant as Lisa’s Houtou made a reappearance.

Upon leaving that restaurant (rather quickly) Lisa suddenly saw Fuji which had finally appeared through the mist and the clouds. At last I got a close up view however I was confident tomorrow it would be much better!

An evening was spent at the only bar in town watching dreadful WWF wrestling. So with a very early start planned the next day we made an early exit!

"Yesterday’s observation was that at Lawsons the equivalent of our Londis, you can get a selection of god damn awlful looking boiled meats. These delights are pictured and for the record I would rather eat my own arm than try these."

Tomorrow we see Fuji at sunrise! 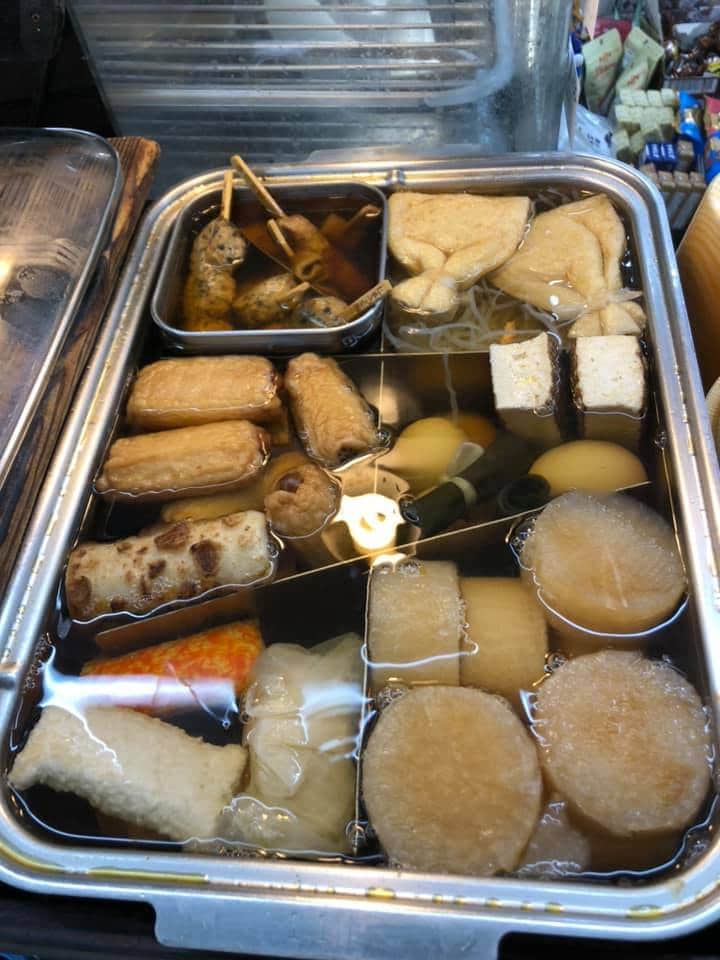