Today turned into one of those days that will live long in the memory although it wasn’t without its moments which probably comes as no surprise !

Like excited children we all met in Shinjuku at 1230 with match day Yokohama kicking of at 1700. Ample time you would think to make it to the stadium, enjoy some pre match looseners and take in the atmosphere of England’s biggest game in years against the mighty All Blacks.

We boarded the train and soon met with some South African and New Zealand fans and nervously discussed our thoughts on the game whilst relying on a team of experienced travellers and google maps to take us to the Yokohama stadium. Well they did that but unfortunately it was to the Baseball stadium

You would think that 70,000 fans going in the opposite direction to us would have given us a clue but no….. we were right and they were wrong.

We then took various incorrect turns, got on the wrong trains and basically screwed it all up so four hours later we arrived somewhat stressed at the international stadium…. then things really took a turn for the worse….

Unbelievably we had dodgy duplicated tickets and were refused entry to the stadium. A young Japanese steward escorted us to the ticket office where a line of disappointed England fans were being told that their tickets would not get them in. I overheard a marshall ask someone if they had already been inside the stadium and come back out so I took that angle and promptly managed to get us access into the stadium even though i knew we would not have a seat !!

Dom then had to do a BBC radio five live interview while I got a programme seller to assist me put my contact lenses in…..

Sure enough, stressed, sweating, without beer, food and blood pressure at an all time high, although i could see….. we met the occupiers of our seats who had purchased theirs via stubhub. Ours were purchased via viagogo but they were the exactly same tickets but we were in !!

We spent the next half hour seat hopping till finally we got one each and the rest is history!

Match day Yokohama – what a day!

"Yesterday’s observation is that there are four stadiums in Yokohama – we know two of them !! 😂"

Today its the end of our Far East adventure….. or is it ? 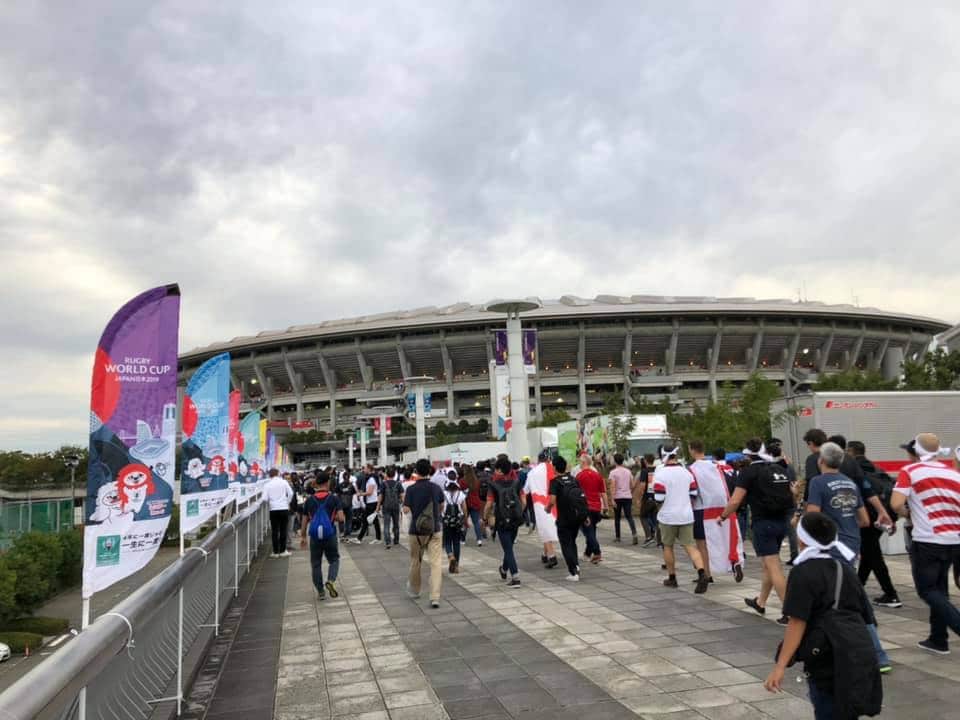