Yesterday we well and truly got our exploring boots back on and walked from our hotel to Kyobashi, Osaka where we picked up the Aqua liner boat that takes you on a route along the river past places like the Japanese Mint (these are the people responsible for producing the billions of coins you end up with in Japan) to Osaka castle. While the boat is fun it’s inside only and is very low in order to get under the bridges plus a lot of Osaka’s buildings are very high so it was a slightly disappointing experience. The journey took about 30 minutes costing £10 and included a trolley service for drinks from a very smiley lady.

We disembarked at the castle and mooched around the gardens before walking up to the castle. On route we discovered a few facts about Osaka…..the local speciality is Octopus balls called Takoyaki, they have a baseball team called the Osaka Jaguars whom we watched training and you should not use a flash when photographing a Japanese falcon display.

After the castle we got the train to the old part of town which then merged into Korea town which was an extremely busy street that went on forever and was full of short people buying pop socks whilst noshing on Octopus balls.

Osaka is the second largest Japanese city and is very much about skyscrapers, business and money. We then got the train back to our hotel via the enormous Osaka railway station before a rather unusual evening out.

Now for two lads on tour you would perhaps expect every night to be off boozing in the pub well tonight we learned about the Japanese experience called the Onsen !

We headed out to the Solaniwa Onsen at Osaka Bay Tower where on arrival after confirmation of the cost of about £20pp we were issued with a choice of rather stale smelling Kimonos, a large towel and a small towel and then led through a series of areas where we steadily got undressed and before we knew it these two luxury tour operators were standing starkers by a lucozade coloured bath with about 15 naked Japanese men.

We proceeded to spend 5/10 minutes in a range of different hot baths with, as is customary, the small towel on your head. After each bath you then had to sit in a row on a low plastic stool washing your bits.

The whole experience I found totally bizarre although i was tickled (not literally thank the lord) as at one of the baths there was a picture of two large pumpkins which was either advertising Halloween or showing what could be achieved with a daily Onsen routine.

So feeling cleansed and refreshed we left and did what we should have done in the first place and went to the pub for ironically some offal dumplings and Octopus balls which is exactly what we thought of the whole event !

"Yesterday’s observation - is that you often see full plastic water bottles tied to the bottom of posts or pots outside peoples houses or shops (see pic) – this is known as Nekoyoke and is apparently to stop cats from doing their business through light reflection. I love Japan !!"

Today we travel home but not before a visit to Kobe so you will have an update tomorrow !! 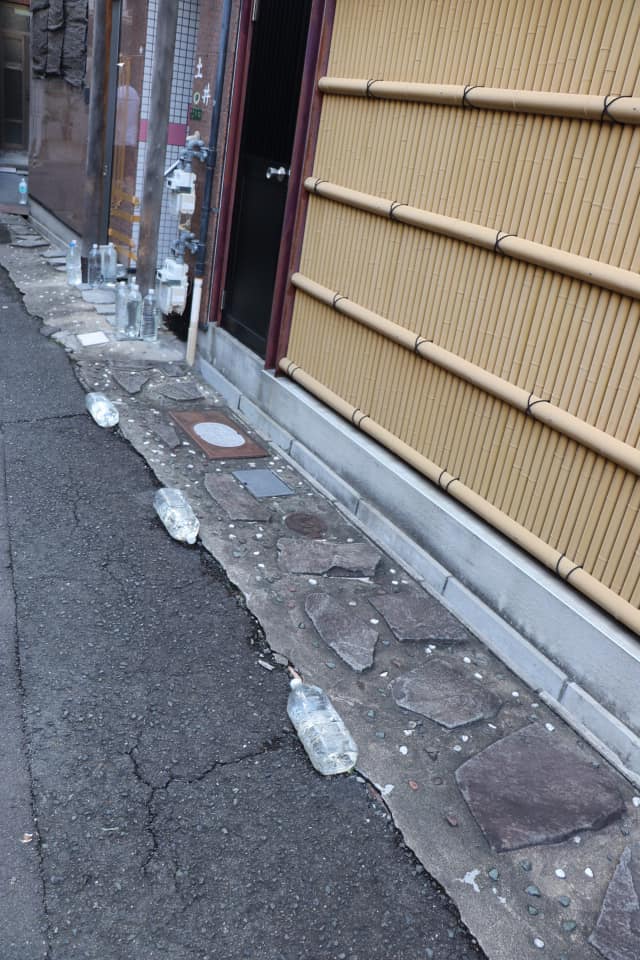