As some of you readers of my blog will know I do love a major sporting occasion whether its football in Moscow, rugby in Japan or baseball in Miami. I was hoping that in 2021 I was going to be able to explore South Africa as part of a British and Irish Lions Tour however the Covid 19 restrictions for foreign visitors curtailed that idea.

Map courtesy of Wanderlog, a trip planner on iOS and Android

In more positive news I was provided with an interesting blog on South Africa which I have now updated to exclude the rugby bits and to focus on the reasons why we should all visit the amazing country of South Africa at least once in our lifetimes!

As a holiday destination, this country has more highlights than could ever be included in a stand-alone trip, often resulting in visitors returning again and again. South Africa also carries a reputation of a real “foodie paradise” and we have to agree, it is a challenge to find a bad meal in a destination that so proudly offers tantalising flavours no matter the dish!

Whether your trip involves learning about the history of Nelson Mandela, exploring the vibrant city of Cape Town, wine-tasting in the Cape Winelands, strolls along beautiful sandy shores or seeking out the Big Five on safari, South Africa is sure to deliver an unbeatable holiday with memories to last a lifetime.

Strikingly beautiful, Cape Town has struck a balance between trendy modern and charming old-world elegance. Glamorous hotels, world-class dining and stunning beaches merge perfectly with buzzing student suburbs and vibrant nightlife. Malay and African heritage is evident in the cuisine, traditions and entertainment while the impressive architecture reveals a strong Dutch, German and English flavour and style. Fascinating contemporary art is proudly displayed in galleries and modern boutique hotels across the city, and quirky wine bars and brandy tasting lounges are in abundance here.

A short boat cruise to Robben Island, approximately seven km’s from Cape Town harbour will take you to the island to explore the prison cell where South Africa’s most beloved legend, Nelson Mandela spent 27 years hard labour. As you stand and soak in the raw history, you really get a sense of hopelessness and it is difficult to imagine how anyone could rise above the horror of incarceration to become one of the most iconic and compassionate leaders of our era.

Towering over the city, Table Mountain awaits exploration. You can access the outstanding views at the top by a cable car which provides panoramic views over the “Mother City” or trek up the mountain if you are feeling adventurous! Other attractions in Cape Town include the Cultural History Museum, the Castle of Good Hope and the world-renowned Kirstenbosch Botanical Gardens. Greenmarket Square’s local crafts markets and the Bo-Kaap’s colourful Cape Malay buildings add a sense of culture and authenticity to your trip, and Long Street’s lively restaurants, bars and clubs come alive after dark. Don’t forget to take a wander around the Victoria and Alfred Waterfront, a working harbour and hub of entertainment and shopping opportunities.

The Garden Route and Kwa-Zulu Natal

Many people visiting the country and looking to explore South Africa will opt for the Garden Route.

Not a garden in the true sense of the word, the Garden Route is more in the way of a Garden of Eden or an area of natural wilderness with endless expanses of untamed forest and pristine beaches. Imposing mountains line the roads and waterfalls cascade from dramatic cliffs into blue-green seas below. Lush green hills slope down to rugged coastlines shaped by the thundering sea. This dramatic stretch of the journey boasts Storms River, which is located within the Tsitsikamma National Park, and bustling resort towns just waiting to be explored are placed amidst the picturesque landscape.

Plettenberg Bay is well known for its beautiful sandy beaches and the town of Wilderness, its hospitality. The vibrant town of Knysna located on a massive lagoon, the entrance to which is guarded by the iconic Knysna Heads. Too many outdoors activities to name allow everyone to explore the peaceful trails and country tracks which wind through towering trees and shaded glades, across sun-splashed shores and along secret paths. Scenic ocean and lagoon boat trips, wildlife sanctuaries focussed on conservation and pretty nature reserves bursting with colour add to the attraction of the Garden Route.

Other attractions include the seaside city of Durban, the countless smaller beach resorts that sit on either side, the highly rated Big Five game-viewing reserves such as Hluhluwe-Imfolozi and Phinda Game Reserves, and a wealth of historical and cultural sites associated with the Zulu nation who are very proud of their heritage and culture.

The province of Kwa-Zulu Natal offers 82 battlefields, museums, old fortifications and places of remembrance. It holds the largest concentration of significant Battles and war related sites than anywhere in South Africa. This is where the Early Zulu Battles, the Anglo Zulu War 1879, the Rebellion of Langalibelele 1873, the South African Anglo Boer War 1899 – 1902, the Zulu Civil War 1883-1888, the Transvaal War of Independence 1880-1881, the Voortrekker – Zulu Wars and the Bhambatha Rebellion all took place.

South Africa’s economic hub, bursts at the seams with a wealth of art, history and culture. Johannesburg is often avoided by many tourists due to its reputation in the media for crime related violence, however a fusion of chic sophistication and rustic, inner-city vibe born of Africa’s finest creative minds awaits to be explored and this safely achieved with a reliable and trusted guide provided by Kitenge Africa Travel.

Here, modern African art meets designer trendiness and the results are rewarding! From the inner city walking tours, street art and graffiti, to the re-invented university suburbs, the combination exposes a vibrant urban life. Braamfontein’s Constitution Hill, art galleries and incredible restaurants designed for foodies are an example of this regeneration. It is here the continent can express itself and the results are quirky, a little off beat and totally captivating.

Upmarket Sandton, Rosebank and Melrose is a shopping paradise, offering restaurants, and activities easily located beside leafy suburbs. Soweto, once home to South Africa’s most well-loved legend Nelson Mandela, is an essential part of any visit to Johannesburg. The home of Nelson Mandela, the Hector Pieterson Museum and Regina Mundi Cathedral are all an important part of the historical appeal of any Soweto visit, and the importance of South Africa’s turbulent past and hard won democracy is easily perceptible.

Sabi Sands is probably the most famous private game reserve when looking to explore South Africa. It shares an unfenced border with Kruger National Park, allowing wildlife to come and go freely between the two. However, with no day visitors and no self-drive safaris allowed, it offers a much more exclusive experience than Kruger itself. Sabi Sands is comprised of 160,000 acres of untamed bush and is home to all of the Big Five. The Sabi sands also offers frequent leopard and wild dog sightings.

Eastern Cape Game Reserves are perfect for first-time visitors to South Africa. A safari can easily be added to a holiday for families or those not wishing to take malaria tablets. Many of the reserves and parks of the Eastern Cape are home to the Big Five; which is made up of the lion, elephant, rhinoceros, buffalo, and leopard. A 2-3 nights is an ideal time to safari here. If you are planning to drive the Garden Route, it combines really well to fly into Cape Town, and out of Port Elizabeth via Johannesburg back home (or vice versa). Alternatively, if you are not driving then domestic flights can easily be arranged into P.E for you from either Cape Town or Johannesburg.

Welgevonden Game Reserve is malaria free and just an easy 2.5 hour drive or 45 minute flight from Johannesburg, making it a unique means of escaping the hustle and bustle of the city. This reserve is home to over 50 different mammals including the Big 5. The reserve also has kudu, giraffe, zebra, warthog, cheetah, brown hyena, the honey badger and close to 300 bird species. At the same time, the restricted number of vehicles allowed in the park and the fact that the animals have never been hunted means that the they remain largely unphased by human proximity, allowing for particularly close and personal encounters.

Madikwe Game Reserve is currently the fifth largest game reserve and is also one of the lesser- known parks in South Africa. This makes it a hidden- gem as it is regarded as one of the best conservation areas in Africa and offers the Big 5 in a 680 km2 park (750 km2 including newly incorporated privately owned land). The park offers a number of luxurious lodges as well as community lodges in a malaria- free zone. The Big 5 is represented in the park and you are likely to spot lion, leopard, elephant, rhino or buffalo. During your visit you will also have the rare privilege of possibly seeing the highly endangered African wild dog.

If you are looking to explore South Africa on the continent of Africa either contact your local travel agent, a specialist tour operator or the South African Tourist Office. 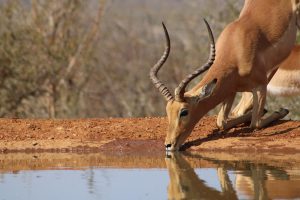 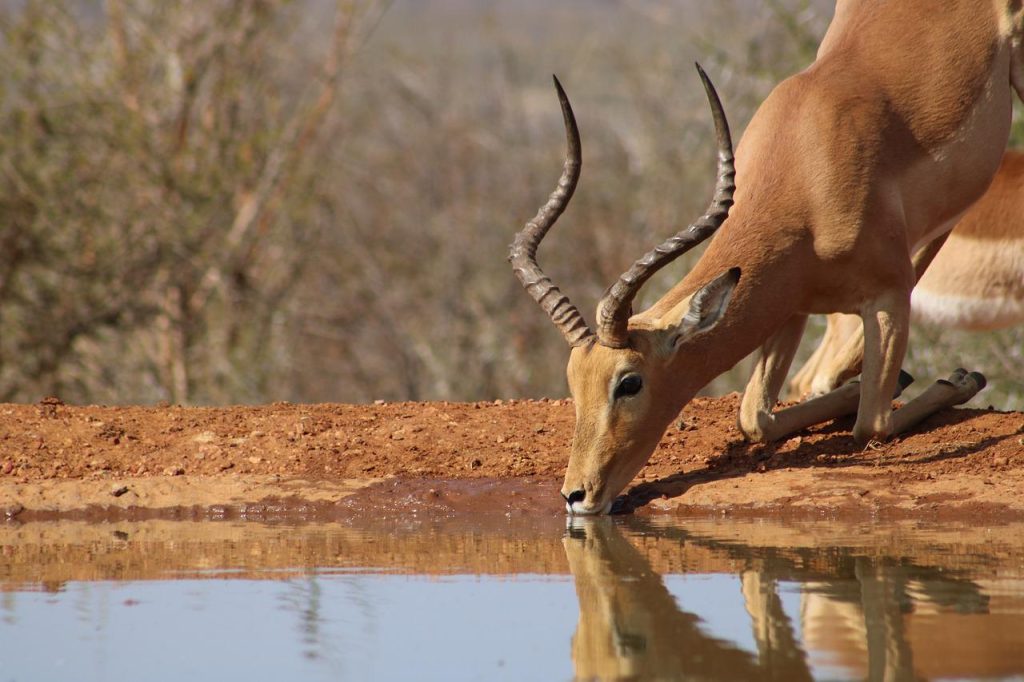 If you enjoyed this blog, why not share it on any of the social media channels below? Just click on the icon here. 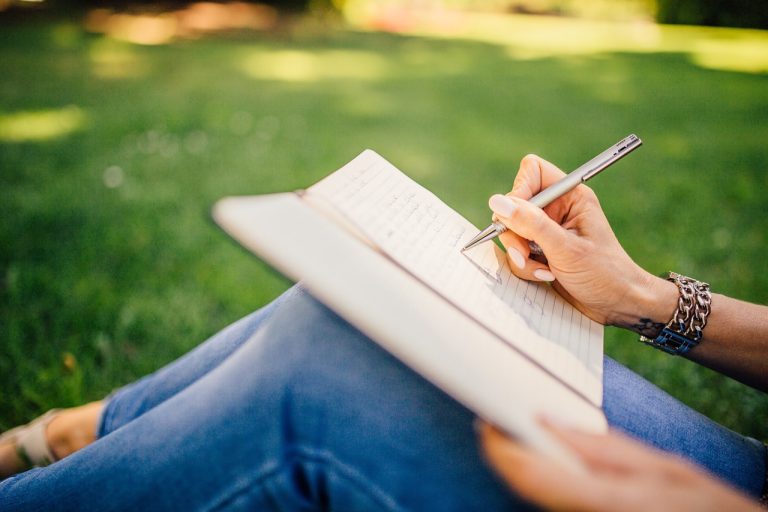 Be sure to check out my travel blog homepage where you will find all of my latest stories and travel adventures.
Blog 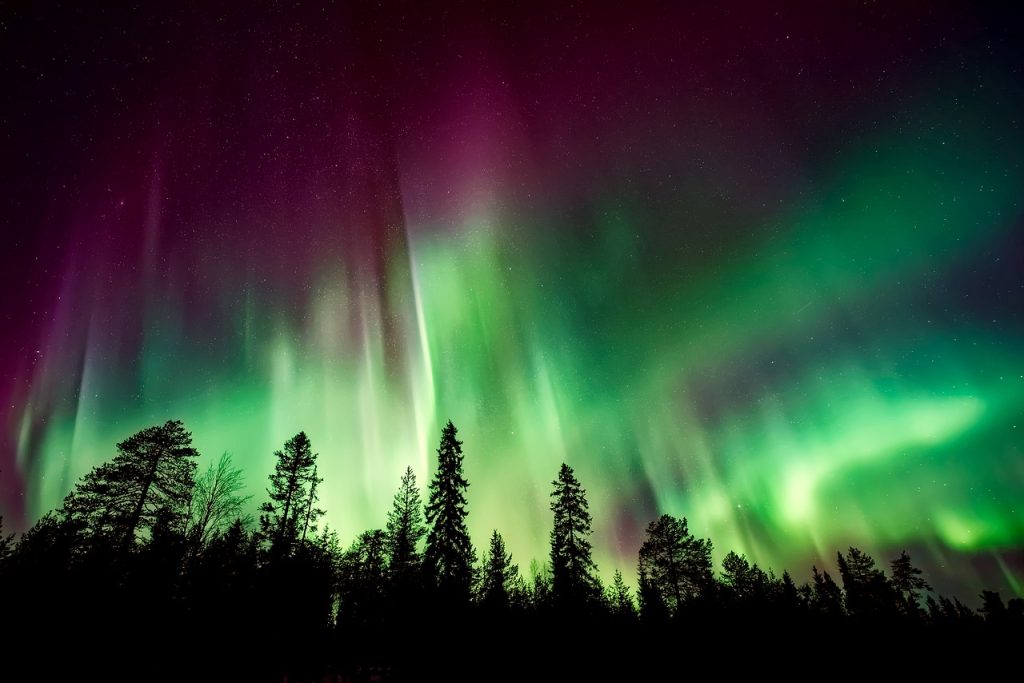 One of the UK’s top travel competition websites with some of the best free-to-enter holiday competitions online. 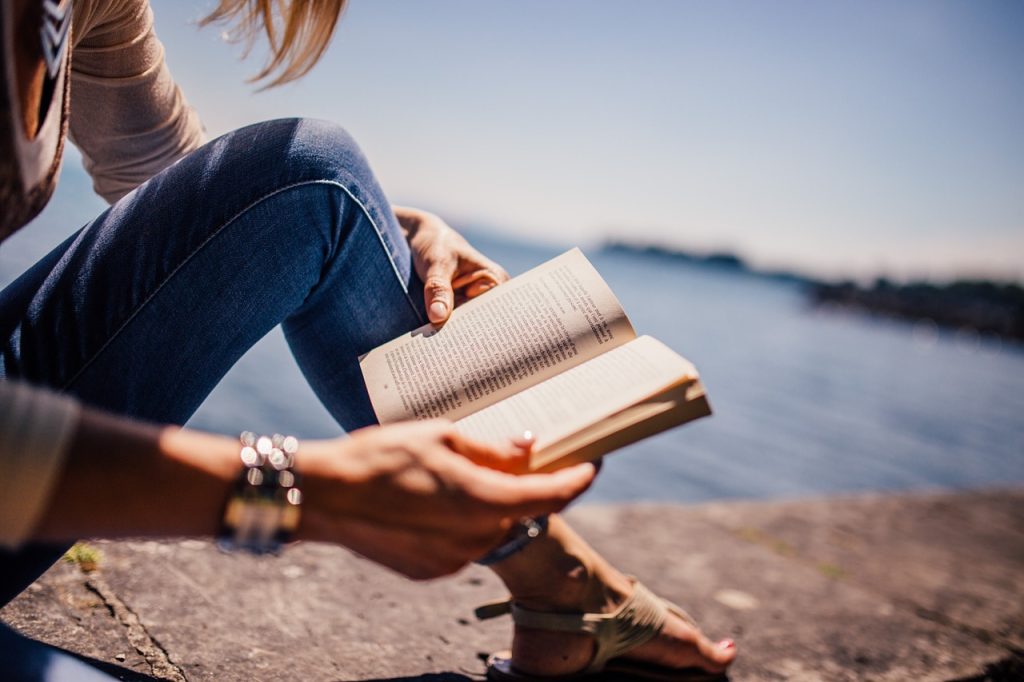 Are you looking for recommendations for that summer beach holiday book read. Check out the latest best-sellers.

Finished here? Head back to the Just One For The Road Home Page.